Could Tesla Succeed In India?

India’s car market is unlike any other in the world despite being one of the most populous countries it doesn’t have many cars. The Indian market overall is a small car market when compared to other countries. Car ownership is still comparatively much lower in India when you compare it to a place like the United States and so a lot of people mostly rely on two-wheelers and three-wheelers to get to places. It’s dominated by motorcycles and mopeds which make up a majority of vehicle sales. 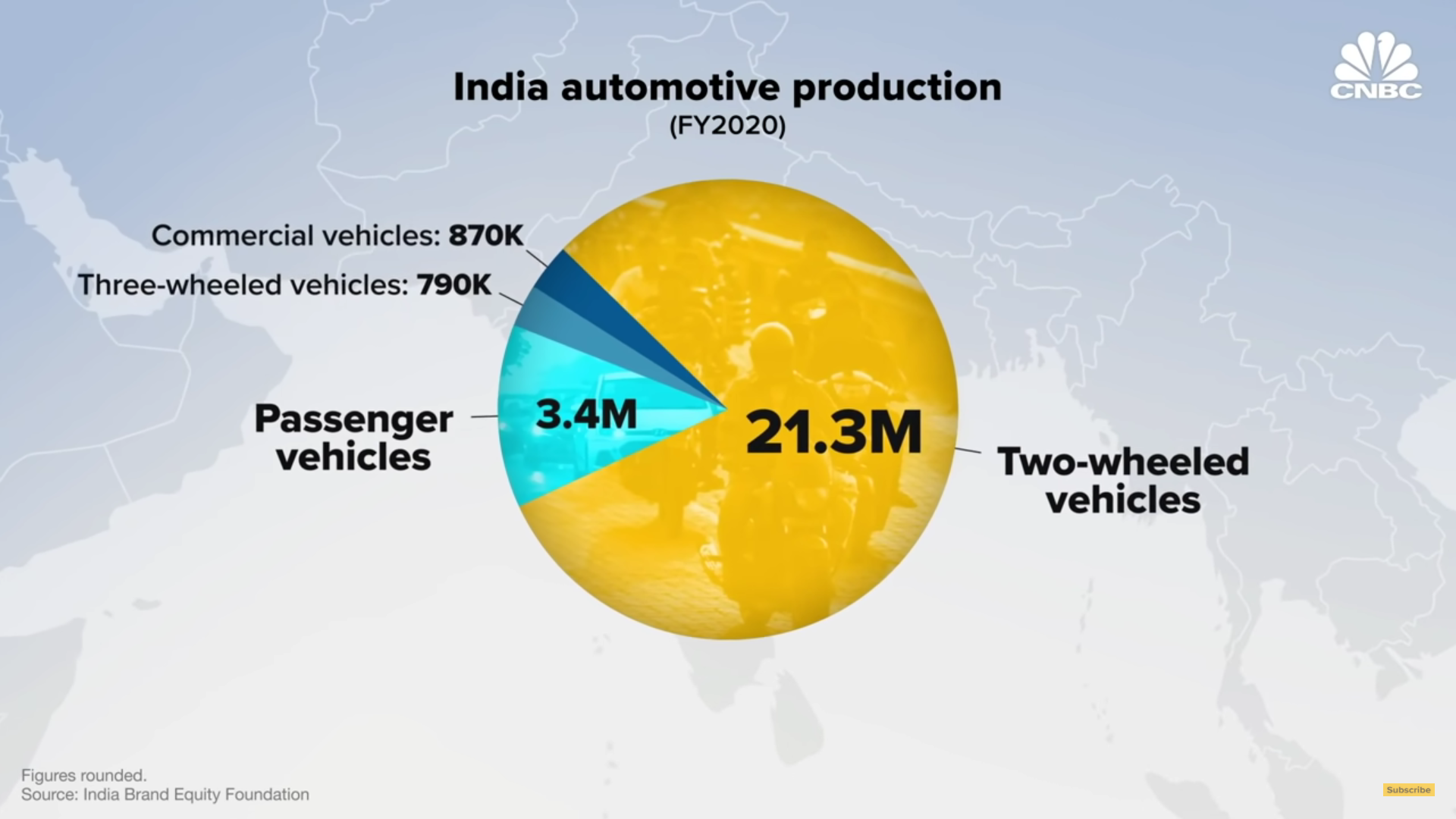 Within the passenger vehicle category, the market is mostly controlled by a few big players. Maruti Suzuki which is owned by Suzuki is the number one player in India they control something like 50 of the market share and everyone has found it tough. 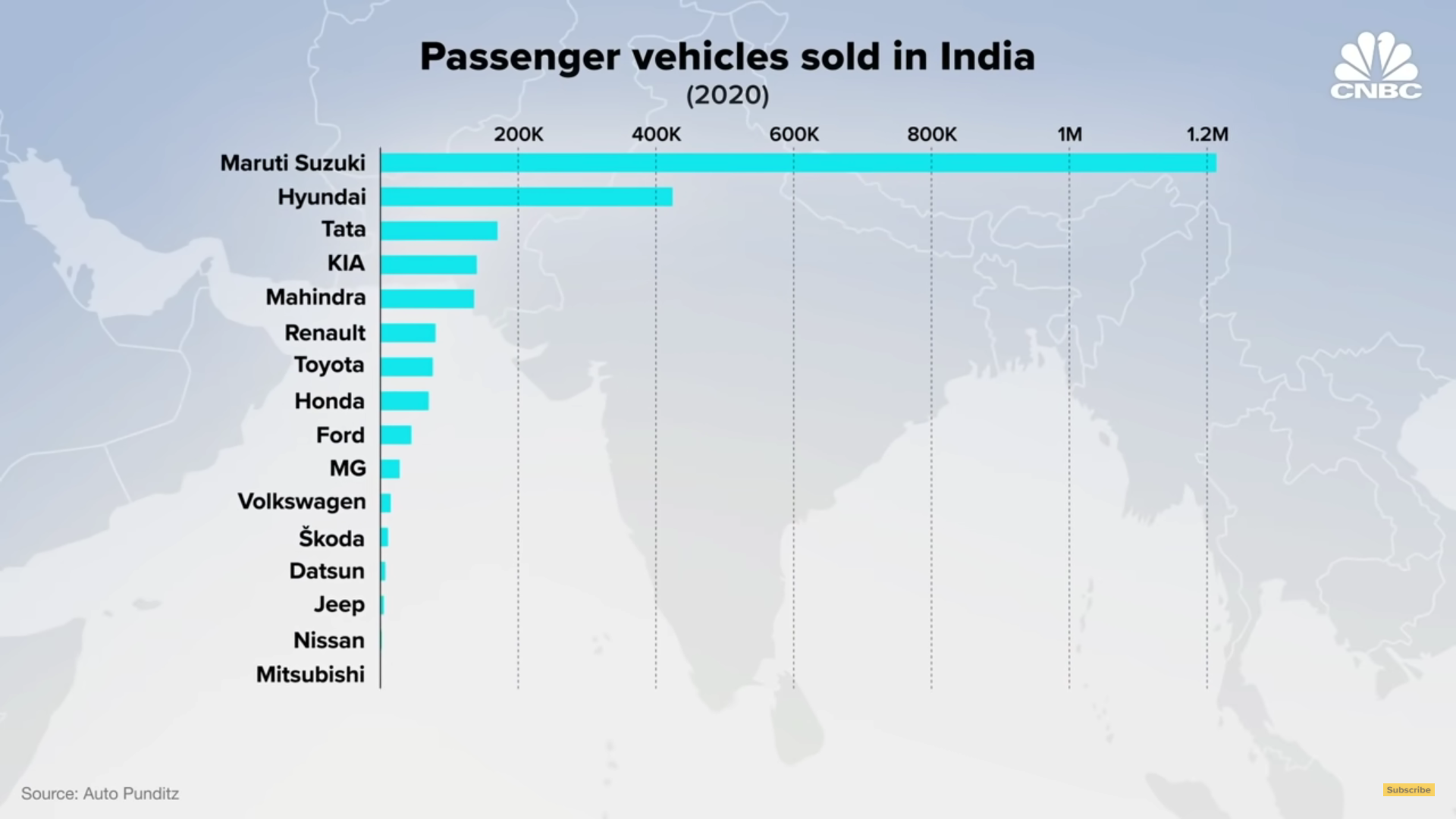 I mean you’ve been reading about gm getting out of India ford has significantly reduced its operations. India’s auto industry has been growing it’s now the fifth-largest auto market in the world behind Germany, Japan, the US, and China and it’s expected to grow 11.3% from 2020 to 2027. But overall car ownership is uncommon only 22 out of every 1000 Indians have a passenger vehicle and the most popular are on the lower end it is a very cost-conscious market because it has so many cheaper alternatives available.

The best-selling brand in India is Maruti. They’re experts in making mini vehicles which are really cheap. They cost around ten thousand dollars that’s what makes up a bulk of the Indian market in cars. The luxury segment is small but it’s expected to grow at about six percent in the next five years. You do have entrenched players like Mercedes, Benz, and BMW who are the number one and the number two players in the market but the luxury car market accounts for only one percent of the overall passenger vehicle market.

There are not many electric vehicles but that is starting to change. Electric cars are still a very minuscule portion of the total number of vehicles sold in India. The EV market in India is just at the very nascent stage. Tata motors are going to be launching their EV vehicles. Maruti Suzuki has plans to launch hybrid EVs which they would have a joint venture globally with Toyota. Electric auto-rickshaws have been around for quite some time now there are about 1.5 million electric autorickshaws that are used by millions of Indians every day.

Tesla’s entry into India is highly anticipated but its cars will be out of reach for most consumers. There is virtually no premium market for electric vehicles in India and very little potential at least in the short term for teslas to sell in numbers in India. You’re not talking about the average middle-class person who’s going to be buying a Tesla in India. It has adjusted its pricing to boost demand. In China, it has reduced the cost of model 3 several times. Tesla will want to go as aggressively as possible in price. I would look for them to position Model 3 or Model I may be imported as knock-down parts from china assembled in India and sold as exclusive premium products and when Tesla does come to India it will be entering the EV market in its infancy.

Charging infrastructure is still not up to where it is supposed to be and most of India’s power grids are still, coal-powered and power outages, especially during monsoon season, for example, are very common some of its signature features may not be available either. A lot of technologies that tesla has may not work in India like autopilot and autonomous driving and Auto Change Landing Features. But brand recognition in India is strong Tesla definitely has a loyal brand following in India it’s a small but loyal brand following but will that turn into sales it’s hard to say initially. Tesla has the kind of potential to actually double or triple the premium car market in India. Some experts think importing into India may be the best move for Tesla. Government incentives and policies were used in China, the US, and Europe to help jump-start the industry in those countries.

So India just cannot afford to go electric yet unless the Indian government jumps in there and says okay we’re going to fund this. The government has over the past years announced some initiatives to incentivize battery producers to set up shop in India to give incentives to buy electric vehicles and want to incentivize the local carmakers to produce more electric vehicles by imposing tariffs on imported ones. It is unclear whether Tesla is working with the government as it did in China. Tesla will be facing increasing competition.

Several automakers have plans to introduce electric cars in India. India’s local manufacturers like Tata Motor, Mahindra and Mahindra are already selling electric vehicles in the country. With the high cost associated with EVs today tesla’s biggest competition may still be cheaper gas-powered cars. Internal combustion engine vehicles are still very popular in India because they are comparatively cheaper and so there’d be competition from these local producers as well as the foreign imported cars. But if Tesla were to build a more affordable EV it could give tesla the competitive advantage it needs. India wants to embrace electric vehicles but they’ll do it at very low price points like less than ten thousand dollars.

They’ll invest in two-wheeler and three-wheeler electrics because that’s where the market is and then eventually move up into cars and then up into premium cars. Given all the challenges that India does have, I don’t think that the EV market in India will take off in any fashion in the near future or even in the longer term. India’s growth fell off a cliff last year because of the coronavirus pandemic and so the immediate priorities right now is to get that growth back on track maybe some of that can be incorporated into the electric vehicle space but that remains to be seen.

I hope you found this article valuable. If yes do let me know in the comments 😊

You can now extend your support by buying me a Coffee.😊👇

Buy Me A Coffee